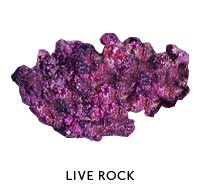 Live rock is an almost essential component of reef and other saltwater aquariums. Aside from being decorative in its own right, it hosts a community of organisms that between them help to establish a balanced aquarium.

What is Live Rock?

Live rock usually consists of chunks of dead coral skeletons encrusted with coralline algae, sponges and all sorts of other protists, bacteria and invertebrates. It is harvested from reef habitats and arrives with most of its fauna still thriving. Essentially, the addition of live rock introduces part of a living reef to your tank.

The harvesting of live rock is not usually associated with any serious conservation problems, although overharvesting has become a problem in a few areas. The bits of rock are not normally hacked off a reef, they have come loose themselves and the organisms included are normally plentiful. It is advisable, however, to ask questions about where the rock came from, how it was collected and transport methods, as much for the benefit of your tank as the wild habitats. Note that live rock can be cultured in tanks, which does away with this issue entirely.

Live rock provides food for various aquarium creatures and decorative algae that take up excess nutrients. Its main benefit, however, is a community of microorganisms that help with the processing of organic waste and prevent the build-up of toxins. In other words, live rock works as a biological filter and is an almost essential part of cycling.

A vast range of different forms of live rock exist, coming from different parts of different habitats, so each carries a different set of organisms. Reef rocks can be simply categorised into three main types. Dead base rock is just that – it has no life but forms a good base. Seeded base rock has been partially cultured and contains some life forms. Live rock, whether cultured in tanks or harvested from the wild, contains a great range of organisms. Base rock and seeded rock form a decent foundation and you can add your choice of live rock on top. As a rule of thumb, choose live rock with organisms from a habitat similar to that of the most delicate fish or invertebrates you wish to keep.