In the oceans, an excess of nutrients causes vast algal blooms, resulting in ocean dead zones. In your tank, the impact might not be so dramatic, but culturing algae en masse is probably not why you set up your aquarium in the first place. As you've probably noticed, excess algal growth clogs filters, reduces visibility and may pollute the water. 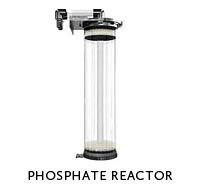 Phosphate reactors are nothing more than specialized filters, designed, as the name suggests, to chemically remove excess phosphates from the water, which should help keep phytoplankton – free-floating algae – and attached algae under control. They usually work by absorbing excess phosphates into a specialized medium. Hobbyists often use them in conjunction with a deep sand bed.

Aside from assembly and placement, a phosphate reactor doesn't require much work to get it going. You will, however, need to change the media fairly frequently. This isn't a discrete biological system – it requires attention from you. When the medium has absorbed its phosphate-carrying capacity, it will stop working.

Phosphate reactors treat one of the symptoms of a nutrient problem, but they don't address the cause of there being too many nutrients in the first place. An excess of phosphates suggests an excess of organic waste, which will also cause an excess of nitrates or, worse, toxic nitrites and ammonia if there aren't enough nitrifying bacteria. In this case, algal growth will be the least of your worries, so take steps to reduce nutrient levels, perhaps by more frequent partial water changes, rather than relying entirely on a phosphate reactor.

Phosphate reactors can also cause problems of their own. The media may leach metals into the water, altering its chemistry. They can also end up removing far too much phosphate, leading to the death of wanted algae, including those living in a symbiotic relationship with corals and other invertebrates.